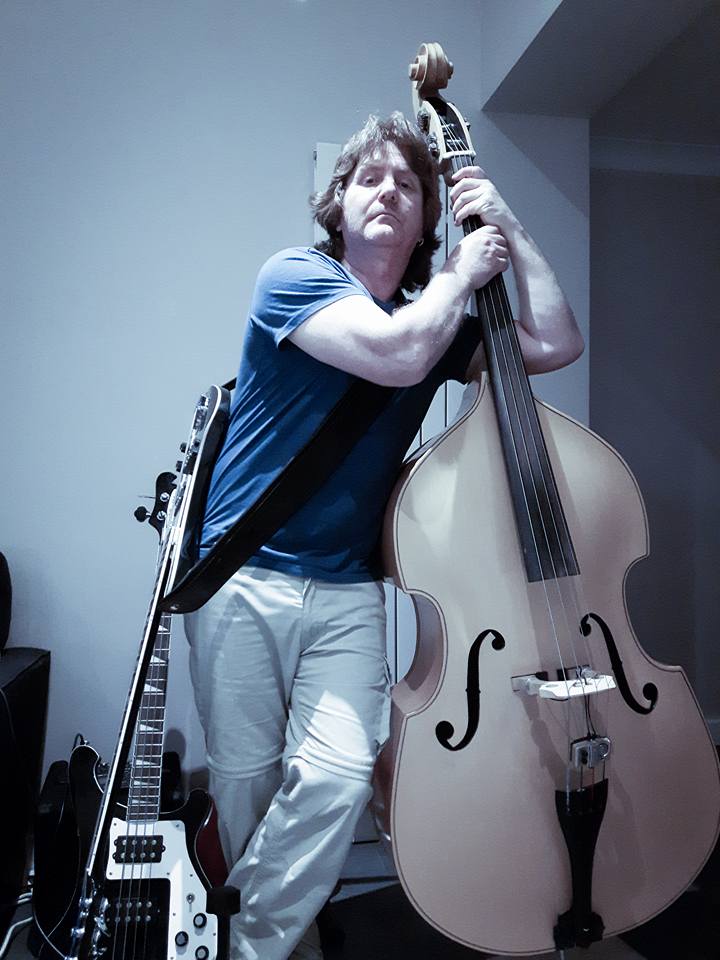 Fergie Fulton is a multi-award nominated and winning musician, who as a bassist works within the blues genre in the UK and Europe. He rose to prominence in the late 80’s as part of the all winning, all conquering ‘Booze ‘n’ Blooze’.

He then went on to play with East Anglian Band, ‘groovedoctors’ , writing, producing and playing some of the most cutting edge Blues on the scene of the late 90’s till 2008.

Then in 2008 to 2013 with festival favourites, ‘Hoke Joint’ who enjoyed great success on the European Blues circuit as well as being signed to renowned Dutch record label Cool Buzz.

In between this, and to this day, he continues being a sideman and dep player for many U.S. touring artists such as Lightning Willie and the Poorboys, Greg Wright, as well as UK acts such as Richard Townends, The Motives,  Earls of Essex, Diceman Brothers, Sheri Kershaw, The Rachmaninoffs, Delta Groove, John Verity, Giles Robson, Strangers Know More, The Sharpeez, to name but a few.

Fergie is currently bass player for UK rising star Connor Selby, a young singer songwriter with a killer guitar sound that harks back to the British Blues boom of the 60s

As well as a Musician he is a Broadcaster, Demonstrator, Clinician, Teacher, Producer and Writer on many subjects concerning music, not just bass playing or the Blues, but in many aspects of the business. He is a contributor to many websites on a range of subjects from bass playing health to playing live.

As a teacher he places a great emphasis on learning music, not learn an instrument.  As he says “Learn music and apply it to your chosen instrument and your playing life will be so much easier.”  He also understands the difference between those that are musicians and those that are players, “In life I have met many great players that do not understand any formal music theory, this does not mean they do not have any, it just means they cannot express it on paper, but can express it on the instrument…this is just another way to learn…music is not a single route way to learn or enjoy playing.”

This thinking reflects in how he approaches teaching, it is about inspiring confidence, not undermining it.

Born in the small coastal town of, Gourock, Scotland, his love of music was apparent from an early age, he was singing and playing instrument around his home and that of his relatives, including the piano at his grandmother’s house. By the time he was nine he had learned to play trumpet, but moved to playing cornet with local brass bands. But this brought him into contact with lower register instruments and off course bass, but as a brass option.

As he got older, and bigger, he moved through the ranks of the brass instruments, until he settled on Tenor Horn, and instrument that seemed to him to bridge his love of playing melodically as well as harmonically.
From this position he won scholarships and funding to work with the Scottish Symphony Youth Orchestra where his orchestral training continued, the clash between his natural ability and the need for formal training was always getting him in trouble, as his interest had moved to the string Double Bass. “I so loved that instrument, but they would not let me play one, partly because I could not afford to, but mainly because they had invested their time on me playing Tenor Horn.”

His love of music and training he received would stay with him for life, he just did not know it yet,  but it meant when he started playing electric bass guitar seriously aged 16 he never looked back.  Local musicians helped him develop his playing and style, as well as his attitude, as he worked with many local bands, then national and International bands and artists. Fergie has always had an eclectic musical taste, and as such he draws on many influences from his experience into his playing, and also the subject matter he choose to teach and discusses. As such he has been involved in playing music for 45+ years so has a vast wealth of experience to draw on, as well as a wide range of musical situations to help others with as he passes on formal and informal knowledge.

This training came to the fore in the early/mid 80s in London, where he worked as a session musician for many producers, as well as in the pits of the West end theatres. He learned sound engineering, working for bands as a sound engineer but from a players perspective, saw him advance his knowledge, as usual he is always looking to learn, he says this about learning, “As human beings we cannot shut of learning, we cannot choose not to learn, we can however choose to ignore what we learn, we can put a worth on what we learn and decide if it is for us…but we cannot stop learning”.

From playing in Orchestras to busking in the street, from festivals in front of tens of thousands to pubs in front of just tables and chairs, from Rock music to Country, Jazz Funk to Folk he has played them all at some point in his life, and all around the world…..not bad for a bass player from a little old town in Scotland.