Fergie Fulton is a multi-award nominated and winning musician, who as a bassist works within the blues genre in the UK and Europe. He rose to prominence in the late 80’s as part of the all winning, all conquering ‘Booze ‘n’ Blooze’.
He then went on to play with East Anglian Band, ‘groovedoctors’ , writing, producing and playing some of the most cutting edge Blues on the scene of the late 90’s till 2008.

Then in 2008 to 2013 with festival favourites, ‘Hoke Joint’ who enjoyed great success on the European Blues circuit as well as being signed to renowned Dutch record label Cool Buzz.

In between this, and to this day, he continues being a sideman and dep player for many U.S. touring artists such as Lightning Willie and the Poorboys, Greg Wright, as well as UK acts such as Richard Townends, The Motives, Earls of Essex, Diceman Brothers, Sheri Kershaw, The Rachmaninoffs, Delta Groove, John Verity, Giles Robson, Strangers Know More, The Sharpeez, to name but a few.

Fergie is currently bass player for UK rising star Connor Selby, a young singer songwriter with a killer guitar sound that harks back to the British Blues boom of the 60s 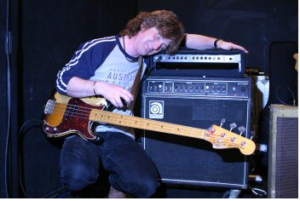